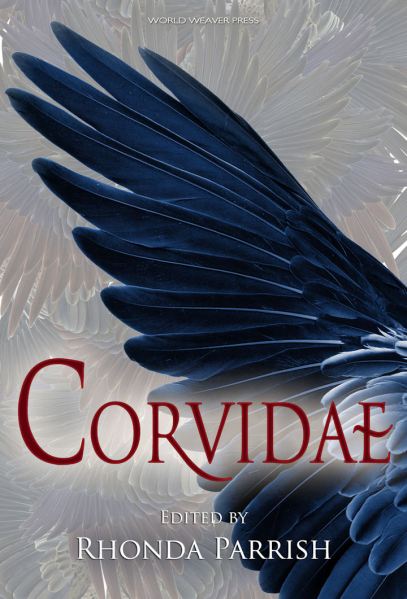 Very excited by the beautiful cover of the Corvidae Anthology, edited by Rhonda Parrish. My story, “The Rookery of Sainte-Mère-Église” will appear within. Here are all the exciting details:

Associated with life and death, disease and luck, corvids have long captured mankind’s attention, showing up in mythology as the companions or manifestations of deities, and starring in stories from Aesop to Poe and beyond.

In Corvidae birds are born of blood and pain, trickster ravens live up to their names, magpies take human form, blue jays battle evil forces, and choughs become prisoners of war. These stories will take you to the Great War, research facilities, frozen mountaintops, steam-powered worlds, remote forest homes, and deep into fairy tales. One thing is for certain, after reading this anthology, you’ll never look the same way at the corvid outside your window.

“Smart and dark like the corvids themselves, this excellent collection of stories and poems will bring you a murder of chills, a tiding of intrigue, a band of the fantastic, and—most of all—an unkindness of sleepy mornings after you’ve stayed up too late reading it!”
— Karen Dudley, author of Kraken Bake

“Magic and corvids collide in this certain to intrigue anthology.”
— Joshua Klein, hacker and inventor of the crow vending machine

“A creepy, crazy kaleidoscope of corvids, Corvidae is what happens when you bring together ingenious writers and sagacious subjects. It’s nothing short of a thrill ride when this anthology takes flight.”
— Susan G. Friedman, Ph. D., Utah State University; behaviorworks.org.

“As sparkling and varied as a corvid’s hoard of treasures, Corvidae is by turns playful and somber, menacing and mischievous. From fairy tale to steampunk adventure, from field of war to scene of crime, these magical birds will take you to places beyond your wildest imaginings.”
— Jennifer Crow, poet and corvid-by-marriage

“Delightfully refreshing! I should have known that editor Parrish (who also edits the cutting edge horror zine, Niteblade) would want to offer something quite unique. I found it difficult to stop reading as one story ended and another began – all fantastic work by gifted writers. Not for the faint of heart, by any means.”
— Marge Simon, multiple Bram Stoker® winner

“Stories of magical beings and the humans they encounter will enthrall and enlighten the reader about both the mundane and the otherworldly. I devoured it.”
— Kate Wolford, editor of Beyond the Glass Slipper, editor and publisher of Enchanted Conversation: A Fairy Tale Magazine

“Seventeen tales… range in feel from horror to upbeat tales about homes where things go right, and are set everywhere from the modern day to mythical fantasy pasts. The best of these stories evoke things from real life – loves and values – and show characters making hard choices that reveal who they are and what they’re made of.”
— Tangent

“There’s no Disney-esque flutter and glitter to be found here — but there are chills and thrills aplenty.”
— Mike Allen, author of Unseaming and editor of Clockwork Phoenix

“Introduction” by Rhonda Parrish
“A Murder of Crows” by Jane Yolen
“Whistles and Trills” by Kat Otis
“The Valravn” by Megan Fennell
“A Mischief of Seven” by Leslie Van Zwol
“Visiting Hours” by Michael S. Pack
“The Rookery of Sainte-Mère-Église” by Tim Deal
“The Cruelest Team Will Win” by Mike Allen
“What Is Owed” by C.S.E. Cooney
“Raven No More” by Adria Laycraft
“The Tell-Tale Heart of Existence” by Michael M. Rader
“Sanctuary” by Laura VanArendonk Baugh
“Knife Collection, Blood Museum, Birds (Scarecrow Remix)” by Sara Puls
“Flying the Coop” by M.L.D. Curelas
“Postcards from the Abyss” by Jane Yolen
“Bazyli Conjures a Blackbird” by Mark Rapacz
“Seven for a Secret” by Megan Engelhardt
“Flight” by Angela Slatter

Rhonda Parrish is driven by a desire to do All The Things. She has been the publisher and editor-in-chief of Niteblade Magazine for nearly eight years now (which is like forever in internet time) and is the editor of several anthologies including Fae and B is for Broken. In addition, Rhonda is a writer whose work has been in dozens of publications like Tesseracts 17: Speculating Canada from Coast to Coast, Imaginarium: The Best Canadian Speculative Writing (2012) and Mythic Delirium. Her website, updated weekly, is at rhondaparrish.com.
CONTRIBUTOR BIOS:

Mike Allen edits the digital journal Mythic Delirium and the critically-acclaimed Clockwork Phoenix anthology series. He’s a three-time winner of the Rhysling Award for poetry; his short story “The Button Bin” was a Nebula Award finalist. His newest poetry collection, Hungry Constellations, offers a 20-year retrospective on his career, while his first collection of horror stories, Unseaming, debuted in October to starred reviews from Publishers Weekly and Library Journal. By day he’s the arts columnist for the daily newspaper in Roanoke, Virginia, where he lives with his wife and frequent project co-editor Anita Allen, as well as a dog named Loki and two sister-felines, Persephone and Pandora.

C.S.E. Cooney is a Rhode Island writer who lives across the street from a Victorian Strolling Park. She is the author of The Breaker Queen and The Two Paupers (Books One and Two of the Dark Breakers Trilogy), The Witch in the Almond Tree, How To Flirt in Faerieland and Other Wild Rhymes, and Jack o’ the Hills. She won the 2011 Rhysling Award for her story-poem “The Sea King’s Second Bride.” Other examples of her work can be found in Rich Horton’s Years Best Science Fiction and Fantasy (2011, 2012, 2014), The Nebula Awards Showcase (2013), The Mammoth Book of Steampunk Adventures (2014), The Moment of Change Anthology, Black Gate Magazine, Uncanny Magazine, Strange Horizons, Apex, Subterranean, Ideomancer, Clockwork Phoenix, Steam-Powered II, The Book of Dead Things, Cabinet des Fées, Stone Telling, Goblin Fruit, and Mythic Delirium. Her website is csecooney.com.

M. L. D. Curelas lives in Calgary, Canada, with two humans and a varying number of guinea pigs. Raised on a diet of Victorian fiction and Stephen King, it’s unsurprising that she now writes and edits fantasy and science fiction. Her most recent short fiction, an Old West set steampunk story, can be found in the anthology Kisses by Clockwork. She is also the owner of Tyche Books, a Canadian small-press which publishes science fiction and fantasy.

Tim Deal is a writer, editor, adjunct professor, and a Bram Stoker Award nominee. His work has appeared in a number of published anthologies, magazines, newspapers, and Websites. He is also one of the Four Horsemen, the hosts of the annual Anthology Conference (AnthoCon). He holds an MFA in Fiction, an MA in Security & Safety Leadership, and is a combat veteran of the U.S. Army.

Despite being terrorized by chickens as a child, Megan Engelhardt still enjoys and respects birds—from a distance. She lives in northeastern Ohio with her husband and two sons and can be found online at megengelhardt.wordpress.com or on Twitter @MadMerryMeg. Her collection of retold fairy tales with Amanda C. Davis, Wolves and Witches, is available from World Weaver Press.

Megan Fennell is a court clerk, cat owner, and writer of strange tales, currently living and working in Lethbridge, Alberta. Although loving magpies to the point of having two of them tattooed on her, it was the Danish myth of the Valravn that held her corvid-like attention span for this anthology. Her stories can also be found in Wrestling with Gods: Tesseracts 18, Tesseracts 17, OnSpec Magazine, and the charity anthology Help: Twelve Tales of Healing.

Adria Laycraft has stories in IGMS, the Third Flatiron Anthology Abbreviated Epics, FAE, OnSpec Magazine, Tesseracts Sixteen, James Gunn’s Ad Astra, Neo-opsis Magazine, and Hypersonic Tales, among others. She is a graduate of the Odyssey Writers Workshop and a member of the Imaginative Fiction Writers Association (IFWA). Adria is also an award-nominated editor. For more details visit adrialaycraft.com.

Kat Otis lives a peripatetic life with a pair of cats who enjoy riding in the car as long as there’s no country music involved. Her fiction has appeared in Orson Scott Card’s Intergalactic Medicine Show, Daily Science Fiction and Penumbra eMag. She can be found online at katotis.com or on Twitter as @kat_otis.

Michael S. Pack was born in the Deep Southern U.S., but he fled to Canada after an encounter with a particularly fierce mosquito swarm. His short stories have appeared in several anthologies, most recently Missing Monarchs (Fox Spirit 2014) and Fractured: Tales of the Canadian Post-Apocalypse (Exile Editions 2014). He is currently working on an epic fantasy novel. He sometimes posts on twitter @Michael_Pack and on Facebook at facebook.com/M.Pack.Author.

Michael M. Rader lives in Colorado with his wife and two children where he does dad things, engineers electrical things and writes spooky things.

Mark Rapacz’s stories have appeared in a number of publications, including Plots With Guns, Revolver, Dark Corners, The Booked. Anthology, and The Best American Nonrequired Reading 2012. His novel City Kaiju was just released in 2014, while his second novel, Foreigners, is forthcoming from New Pulp Press in 2015. He and his wife currently live in the Bay Area where he continues to write stories.

Queensland Writers Fellow Angela Slatter is the author of the Aurealis Award-winning The Girl with No Hands and Other Tales, World Fantasy finalist Sourdough and Other Stories, British Fantasy Award-winning “The Coffin-Maker’s Daughter,” Aurealis finalist Midnight and Moonshine (with Lisa Hannett), as well as The Bitterwood Bible and Other Recountings, Black-Winged Angels, and The Female Factory (also with Lisa L. Hannett). She has an MA and a PhD in Creative Writing, and is a graduate of Clarion South 2009 and the Tin House Summer Writers Workshop 2006. She blogs at angelaslatter.com about shiny things that catch her eye.

Laura VanArendonk Baugh was born at a very early age and never looked back. She overcame childhood deficiencies of having been born without teeth or developed motor skills, and by the time she matured into a recognizable adult she had become a behavior analyst, an internationally-recognized animal trainer, a costumer/cosplayer, a dark chocolate addict, and a Pushcart Prize-nominated author with a following for her folklore-based stories and speculative fiction. Find her at LauraVanArendonkBaugh.com.

Leslie Van Zwol is an avid genre writer who enjoys adding a dash of grit to mystical worlds. She spends her days working for justice to support her nighttime writing habit, and is always on the lookout for her next adventure or inspiration. She also attributes the accuracy of this story to the noisy magpies that were constantly squawking outside of her window during the writing process. (Although the crows continually voiced their objection to the subject matter.)

Jane Yolen, often called “the Hans Christian Andersen of America”(Newsweek) is the author of well over 350 books, including OWL MOON, THE DEVIL’S ARITHMETIC, and HOW DO DINOSAURS SAY GOODNIGHT. Her books and stories have won an assortment of awards—two Nebulas, a World Fantasy Award, a Caldecott, the Golden Kite Award, three Mythopoeic awards, two Christopher Medals, a nomination for the National Book Award, and the Jewish Book Award, among many others. She has been nominated three times for the Pushcart Prize in Poetry. She is also the winner (for body of work) of the World Fantasy Assn. Lifetime Achievement Award, Science Fiction Poetry Association Grand Master Award, Catholic Library’s Regina Medal, Kerlan Medal from the University of Minnesota, the du Grummond Medal from Un. of Southern Missisippi, the Smith College Alumnae Medal, and New England Pubic Radio Arts and Humanities Award . Six colleges and universities have given her honorary doctorates. Her website is: http://www.janeyolen.com.

Anthologist and contributor photos may be requested through publicity@worldweaverpress.com. 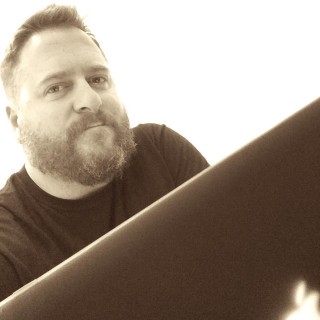